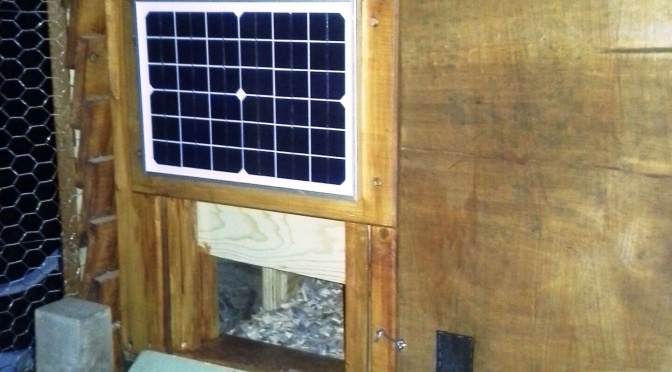 I wrote a few weeks back about our new coop we had to build at a friends property due to outdated Baltimore County zoning regulations. I was really happy with the coop and how it turned out, considering it was built from free pallets off of craigslist. The only issue is that the coop being about 1 mile from us, meant having to make the trek every day to let them out and put them to bed. Enter: CoopTender Automatic Door.

We received the new door a few weeks ago and it took me almost 2 weeks just to get the time to go over and do the install. The install was actually very easy, just framing it in and using 4 screws to bolt it to the frame.

I was pretty excited as it is a solar operated with battery backup. It can be programmed to open/close at dawn/dusk +/- X minutes or set to specific times which I really like. It also has the ability to be set to freezing temperatures outside so it won’t open if its to cold for the girls to be out. Once installed I programmed everything and it operated beautifully with the exception of the wifi.

Being out in the sticks there is NO wifi signal any where in the area that I could piggyback off of to get it loaded to the internet. Even tried setting a “hotspot” on my phone, but it would not download. Oh, well, I will worry about that later.

For the moment, I was happy, no more having to rush over or worrying about being there by a specific time at night to close them in the safe and secure confines of the coop. But things are never easy are they?

The 3rd night after install, we had a huge influx of storm systems, one right after the other for 3 days straight. During the first night of storms, something went haywire and the door lost all the programming I had input.

When I tried to reprogram, the keypad would lock up and not allow me into the programming menu. I checked the book, then got on instant chat with the manufacture in Pennsylvania.

I will say that the manufacturer was very kind and helpful, but to no avail. I had to remove the faceplate with all the electronics and ship it back to have it tested and repaired. They won’t even receive it until tomorrow (Tuesday) so I won’t have it back until probably sometime next week.

I am still very impressed with the quality and operation of the door, as well as the quick response and helpful suggestions from customer service. I truly hope they are able to find the issue and repair or replace the faceplate. I am so looking forward to not having to run over at specific times to deal with them.

Sustainable Living & Saving Money; Homesteading like my ancestor's, except in suburbia!

Check out the “Green News Daily”

Why You Should Go Green Daily News